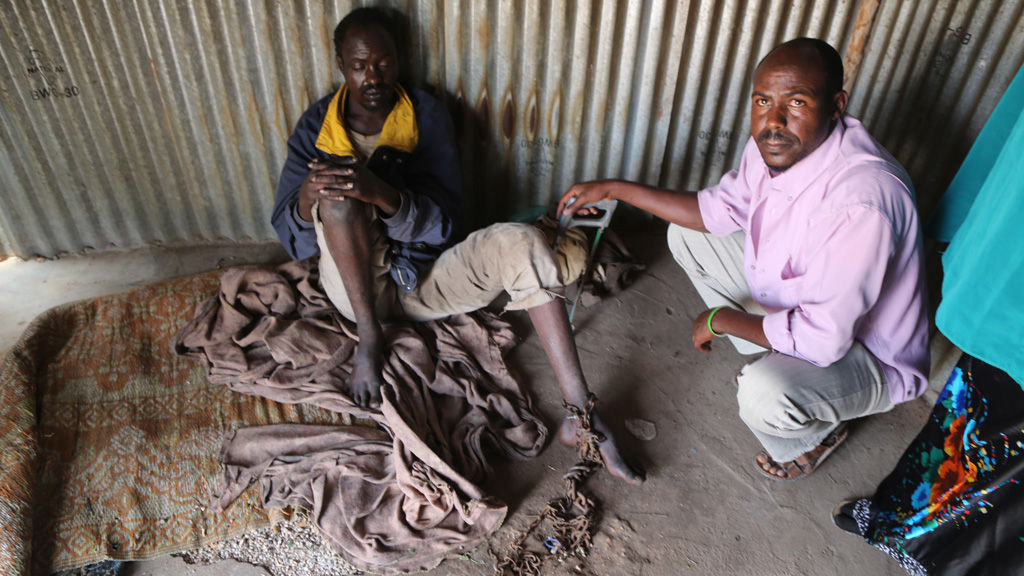 Ravaged by war and instability, It is estimated that the prevalence of mental health disorders in Somalia is higher than in other low-income and war-torn countries (one person out of three is or has been affected by some kind of mental illness). There are many reasons that explain the high rate: overall insecurity (such as displacement and violence), war traumas, poverty, unemployment and substance abuse.

Mentally challenged people are stigmatized, discriminated and socially isolated. Degrading and dangerous cultural practices such as being restrained with chains are not only widespread but also socially and medically accepted.

Women and ex-combatants are exposed to a higher extent of development of severe forms of distress.

Psychotropic drugs, essential for medical treatment and for managing the most acute and initially aggressive cases, are not always available at the facility level. Serious doubts arise regarding the capacity of medical staff to properly prescribe and make use of them.

Only three psychiatrists are reported to be working in the facilities, however, their professional background is not up to the international standards.

Since the fall of the Siyad Barre’s government in 1991,  followed by Somalia’s slide into total anarchy for over two decades now, the country’s health service was completely and utterly destroyed. Not to mention reoccurring severe droughts, persistent clan warfare, piracy, and geo political upheaval, it has over the years took its toll on the […]

Berbera hospital is typical of most mental health facilities in Somaliland; severely under funded and over whelmed. The hospital is lacking on two sides. Firstly, the hospital lacks the most basic furniture for patients such as beds. We have so far donated 30 beds complete with mattresses and pillows. On the other hand ,the hospital […]