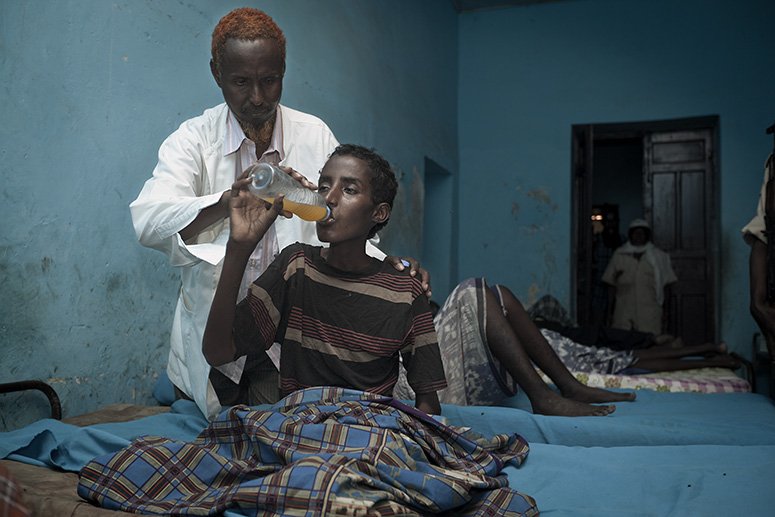 Since the fall of the Siyad Barre’s government in 1991,  followed by Somalia’s slide into total anarchy for over two decades now, the country’s health service was completely and utterly destroyed.

Not to mention reoccurring severe droughts, persistent clan warfare, piracy, and geo political upheaval, it has over the years took its toll on the mental health of the civilian populations who had no choice but to stay.

There are no up-to-date statistics on the health of Somalia’s populations, but it is thought up to 1 in 3 suffer from some sort mental disorder in Somalia.

Despite  the fact that international non governmental organisations (INGOs)  have tried to tackle the issue, nevertheless it remains a modicum of effort  compared to the almost impossible task at hand.

Sporting red henna dyed goatee and hair, oozing with refreshing vigour, despite witnessing horrors of the ongoing civil war,  “Dr. Habeeb” as he likes to be known as – a nurse by training – has been a prayer answered to those who have been helped by him.

Lacking health facilities, expertise and knowledge to deal with mental disorder,  families of those effected have been resorting to often cruel methods to keep patients under control, who are a danger to themselves and society at large, they are often chained to trees or beds for prolonged periods.

With meagre resources, supported by local businessmen,  Dr habeeb over the years has been persevering at the fore front of this silent but devastating war.

A nurse by training, he was able to work at the current site for years, with little in the way of drugs and accommodation, But now, his vital work is sadly in danger  of coming to an end.

Mogadishu is now experiencing a respite from the incessant deadly violence that occurred on daily basis, businessmen are returning and investing in Mogadishu, importantly residents who took flight from the capital returning in droves to reclaim land and properties the left.

Dr Habeeb’s hospital – if it can be called that- is located on a piece of land worth a lot more financially to its landlord than it did just few months ago,  Habeeb is being asked to pay $2000 a month, an exorbitant amount for a place that is run on a shoe string budget.

Horn Africa development association is currently working with Dr Habeeb, to rehabilitate a new site in Mogadishu Bigger and and suitable to Habeeb’s vital work.